For millions of years, it has been a daily obsession for living organisms to seek out safety from the elements and safety from predators, lest that day be their last. Living in the Western world, it’s easy to forget that many humans still live this way of life, not having much certainty about how they’re supposed to keep themselves alive for the next day or two. This article isn’t really about those people though, this is about the Western people, but I wanted to reflect on the fact that we’re still at a stage in history where we can ask “what would we create, if we were free from our Earthly constraints? What would we do if we were really free?”

It’s therefore not too far-fetched for us to start asking, when are we going to build a flying castle? Castles or kingdoms in the sky have featured in stories from Laputa to Peter Pan, Star Wars and Journey to the West.

It might come as a surprise to hear that one military has put serious consideration into building nuclear-powered aircraft carriers, capable of carrying 3,000 troops and 22 fighter jets. No, it wasn’t Russia!

We’ve explored previously in Nationality as a Service how in this day and age, it’s becoming increasingly pointless to point sharp things at people, telling them how to live their lives. We live increasingly online, in a culture governed more by West-Coast American tech companies, than by our local rulers. In this light, there’s therefore not too much point in builing aircraft carriers, whether flying or floating.

What if we built the nuclear-powered, flying behemoth anyway? Some of the greatest inventions in history, such as the RSA cryptosystem or coffee, have been things that weren’t really requested per se, but once they were revealed to the world, the world changed in remarkable ways. So let’s consider as a thought experiment, what would happen if we built a castle in the sky?

Living in the clouds would mean we’re free from the risk of flooding. By floating above the clouds, we could have more reliable access to sunlight (for ambience) and easier avoidance of unplanned rain. We’d also be able to avoid a lot of smog, seeming as that’s heavier than other air; and naturally floats down. Rather than trying to seed clouds, we can rise above them.

A floating city would also redefine the idea of sister cities, a well-meaning concept that really doesn’t seem to have much substance − what if the floating city had sister cities around the world, that it regularly visited? Imagine if Miami for instance had a floating version, then when Miami was in town, people could spend their days talking about crypto, flaunting their wealth or twerking.

When we were thinking before though, about needing to win hearts and minds to be effective as a nation, rather than relying on threats of force, then the idea of a visiting sister city becomes much more compelling. If we were able to create a touring version of The Gong for instance, then it might turn up in Wales and make some new friends. Sweden attempted something vaguely reminiscent of this, with the idea of The Swedish Number, where you would call the number and just chat to a random Swede. By connecting with the rest of the world, it’s appealing to Swedes and it helps for diplomacy. Imagine if it was Sweden being invaded now, rather than Ukraine − with their increased cultural presence, I would argue that the feeling on the street would be much more in their favour, than it is for Ukraine. It’s a useful defensive strategy to make friends and be likable. 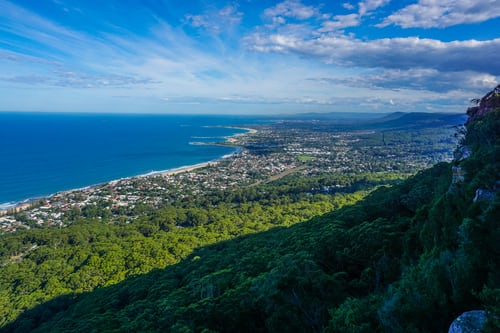 Wollongong, as seen from the nearby Illawara escarpment

As a country that prides itself on being eager, culturally-aware travellers; and being open to innovation and new ideas, then it makes a lot of sense for Australia to create a floating city. It would be a strong forcing function for cultural exchange and awareness. It would be like having thousands of ambassadors, to spread goodwill through the world and to help bring the best foreign ideas back to Australia. The main people living there would logically be those who are most sociable and most open to new ideas − these people would be well suited to being representatives of Australia. Compared to the $44.62 billion (AUD) spent on “defence” in 2021, it’s hard to rule out the castle as a pie-in-the-sky idea.