Last week’s school shooting in Uvalde (Texas, USA) saw a range of people expressing their hot takes on what needs to be done to stop this, ranging from the incessant, repeatedly ignored idea of restricting gun sales; to the idea of arming all teachers (watch out if your homework is late!); and even to the idea of locking the back door.

Sure, the Non-Human Party doesn’t believe that mentally ill children should have military-grade weapons, but we’re a pragmatic party and if we can at least push society in a good direction, that’s better than getting nothing done. It’s apparent that gun reform in the US is probably going to be decided by hot takes, so here’s ours!

Upon visiting Google Maps and having a look at Uvalde, the first thing that came to mind was, “what a depressing, car-dependent, concrete dystopia. No wonder the shooter was happy to die.”

Uvalde from above. Image: Google Maps.

To confirm the theory, I similarly looked at Newtown (Conneticut, USA), where the Sandy Hook shooting occurred, in which 28 people died, including the perpetrator.

If you have by chance also read through this list of school massacres, maybe you’ll notice the same pattern that I’m proposing: most of the places where school massacres occur are not appealing places to live. In fact, there seems to be a correlation whereby the perpetrators in the nicer places are more likely to have more obvious issues with their mental health, whereas for the less appealing neighbourhoods, the shooter might not have really stood out from the norm.

In sunny Parkland (Florida, USA) for instance, the local police had received at least 45 calls in reference to the 19-year-old perpetrator, his brother, or his family home. He had no qualms publicly expressing his hatred against various social and ethnic groups; he’d been diagnosed with depression, autism, and ADHD; and he’d been recommended for involuntary psychiatric examination, to no avail.

"Everyone predicted it," a student said about the #Parkland shooting. pic.twitter.com/mbzBIw8iUa

Compare this mental health background to somewhere in a less appealing neighbourhood − Uvalde for instance. According to the Texas government, 81% of the students at the school were economically disadvantaged and 40% of the municipal budget was spent on police. The perpetrator here had no criminal record, nor any documented health issues, although social media acquaintances said he openly abused animals and livestreamed the abuse on Yubo. His colleagues at fast-food restaurant Wendy’s referred to him by names including “school shooter”, due to his fashion choices.

In a crime-infested dystopia where people joke about school shootings and where livestreamed animal abuse can be shrugged off, is it any surprise that a mass shooting happens?

In a dystopia, can you really tell all the residents, “ok, no more guns”? Such a solution is so naïvely idealistic. These Texans are living in an anxiety-inducing nightmare where they don’t feel safe; and where shooting animals for fun is still seen as a viable hobby.

Gun fans might concede that this effect is staggering, but they might perhaps fall into the mindset that death by suicidal gun owner won’t happen to them. The thing is though, when people snap, they don’t necessarily limit the suffering just to themselves.

Upon meeting a man on the bus in New York recently, we happened to be chatting about gun control and I mentioned the lack of any mass shootings in Australia since 1996, let alone school shootings. “Yeah, but what about stabbings?"

The Australian gun buyback − did it do anything for stabbings? Image source

We might like to write off this man as the sort of gun fan who would clutch at any excuse, no matter how absurd; but it’s a road to ruin if we just write off any political rivals as idiots, whose opinions should be ignored. For this man, it’s part of his reality that life is miserable and that there will always be a motivation for people to lash out against society. This depression and disenfranchisement are ingrained in him more deeply than what others might regard as the “common sense” that children probably aren’t going to have the physical strength, nor the emotional stamina to stab multiple people and see the sight of blood everywhere.

When people feel anxious and unsafe, they’ll be biologically incapable of focusing on anything else until the feeling of calmness is satisfied. It’s this ingrained desire for safety that explains why the surge of COVID-19 in the US led to increased sales of not just bread-makers and toilet paper, but also a 64% surge in gun sales. First-time buyers made up more than one fifth of these purchases, resulting in 39% of American households now owning a gun. 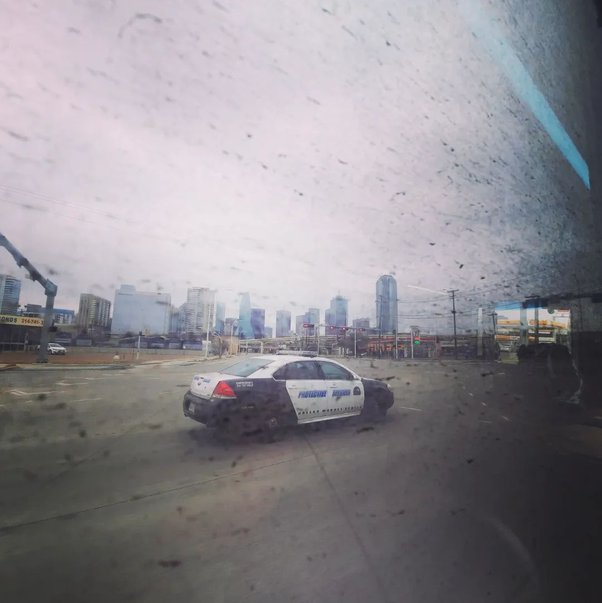 Dallas, as seen from a bus. A typical American city, where people are expected to feel at ease.

In previous articles such as Keeping Governments Relevant in the Web3 Era, we’ve explored the idea that humans are becoming so immensely powerful and self-sufficient that our abilities would be portrayed as super-powers in previous generations. If a super-human goes rogue, we’re all under threat; so we can either tear down industrial society completely or we can pursue a strategy of ensuring that all members of our society feel no desire to destroy each other.

We don’t have to keep building concrete sprawl that’s inhospitable; dangerous to pedestrians; and devoid of nature. We can build enjoyable, harmonious places to live; places that spark joy for humans, robots, and animals alike. In the aftermath of the 2012 Sandy Hook shooting, the town decided to demolish the old building and hire architecture firm Svigals + Partners to design a new one. There was a long list of safety regulations, perhaps including a lock for the back door; so the building could’ve ended up feeling like a fortress. Instead, in her book Joyful, Ingrid Fetell Lee praises the building as a success story; a place that’s playful and joyful:

A wavy line of two-tone wood cladding runs the length of the façade, and the staggered windows seem almost to bounce softly up and down with it. Squiggly canopies cover the entrances to the school. The curves were mostly inspired by the site’s rolling hills and nearby rivers, but Barry Svigals, the founder of Svigals + Partners, also admits a more intuitive inspiration. “Some elements are squiggly because, well, squiggly is fun!” − excerpt from Joyful.

Fetell-Lee’s book also includes a success story of a female prison, where colour specialist Hilary Dalke’s choice of visually appealing tiling resulted in an end to the prisoners breaking tiles off the walls to commit suicide.

Thinking about the natural elements and the geese mural at the school, it should be noted that this is not typical for the US. For those who haven’t visited the United States, it might be a surprise that within urban or suburban areas, the presence of wildlife is viewed with indifference or even hostility − searching for eg “opossum New Jersey” on Google, the first 4 results are all about “controlling” them, “removing them” or “dealing with them”. New Jersey loves the Sopranos, not the opossums.

The bird life in the greater New York area is typically pigeons, starlings, sparrows and seagulls. None of them have much in the way of a human fan club and I could probably count on one hand, the number of bird feeders I’ve seen in the 5 years I’ve lived here.

The only animals that are welcomed are cats and dogs that are owned by humans. Dogs chasing after terrified squirrels is seen as amusing; and cats are free to roam around the neighbourhood on their killing sprees, each wiping out over 100 mammals per year. Notice by the way, all the uncertainty in this cat study, despite the fact that cats are owned by humans who could have been asked about it in the census. Australia too still doesn’t bother asking about gay people, cats or dogs, despite the fact that each group has a non-negligible size compared to the overall human population (4.5%, 14% and 20% respectively).

While we could dedicate more time to the unappealing treatment of animals in our society and their underappreciated ability to bring harmony to humans, let’s limit the focus to what should be done about school shootings.

Modern society, especially its car-dependent urban sprawl, is creating an undercurrent of depression and anxiety. People don’t feel at ease with nature; and they feel unsafe. There are too many gun owners to talk sensibly about disarming them all; and it wouldn’t address the root cause of the school-shooting issue.

American society needs to put less focus on short-term GDP gains, building cheap, soul-sucking concrete infrastructure that doesn’t get maintained. It needs to put more focus on creating harmonious, enjoyable communities. In creating harmony with other intelligent actors (robots and animals), not only could we avoid super-human suicidal maniacs, but we could be free to pursue transcendence and self-actualisation, creating wealth beyond imagination.

In all seriousness, the Non-Human Party extends its condolences to the victims of civilian gun violence. This article is a sincere attempt to convince voters and their governments to finally put an end to the phenomenon.